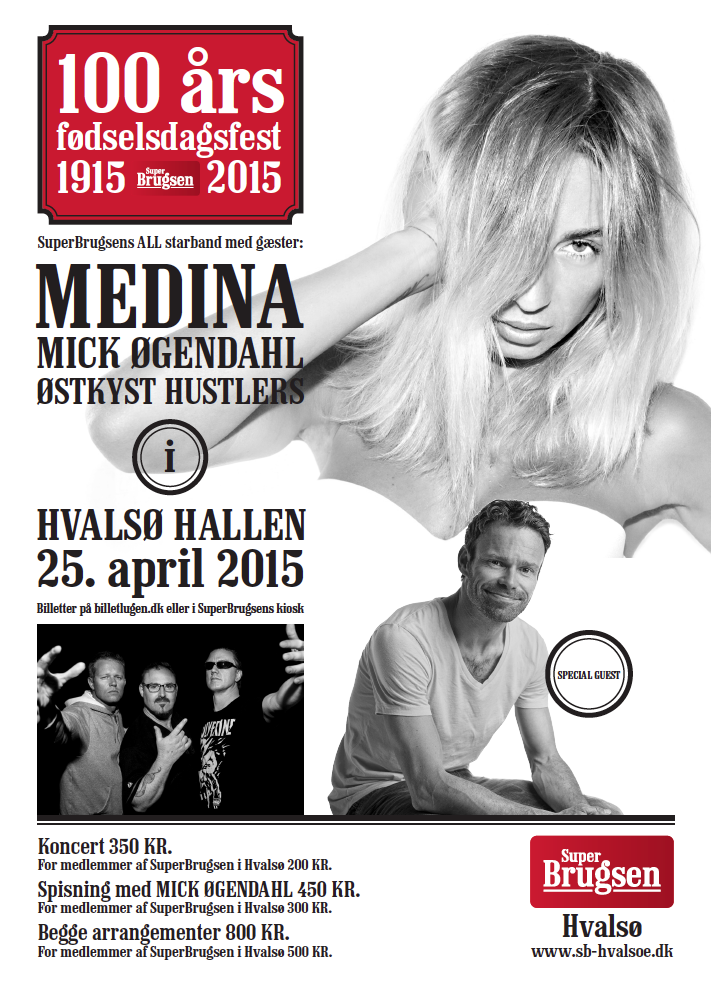 We are producers of the 100 years anninversary for SuperBrugsen Hvalsoe.
We start off with a nice dinner, entertained by multitalent Mick Øgendahl. After dinner our 12 pcs ALL STAR BAND will present names like Medina and Østkyst Hustlers beside playing a ton of cool party hits.

Medina has been the most successful and popular recording artist in Denmark ever since she had her breakthrough with the smash hit single “Kun for mig” in the beginning of 2009. During the last three years she has not only nationally sold more than 500.000 copies of her ten biggest singles and more than 130.000 copies of her two Danish albums “Velkommen til Medina” and the latest “For Altid” –In this period up until now Medina also released 19 music videos which approximately has more than 50 millions views on Youtube. Her first international album “Welcome to Medina” has just reached Gold status in Germany with more than 100.000 albums sold. Her second international album “Forever” is already out in large parts of Europe and during September this year US and other parts of the world will follow and release the album.

The singer has had a huge amount of success with her international single “You & I”. The single was released in the U.K. and ranked as A-list at BBC Radio 1 and entered the American Billboard Chart’s “Hot Dance Airplay” at #6 as well. She’s also taken home a great number of awards for her musical accomplishments, including several Danish Music Awards, Danish DeeJay Awards and three MTV Awards for “Best Danish act”.

Medina has been the face of Reebok for the last two years and she is also the new of face of the first ever Danish local campaign for Schweppes.

Mick Øgendahl is known and loved as one of the most talented comedians in Denmark. When Mick Øgendahl occurs,  it is always entertaining! It provides a breath of energy, whether it is a business event or a TV appearance.
Mick Øgendahl manages to see the fun in all aspects of life – with a humor that is satirical and appropriate. From absurd everyday situations to the disagreements and misunderstandings that occur in relationships, he understands to describe them all in a fun and unique way in which viewers or audience can only laugh of while  they nod in recognition to the situations.
With his small, elastic face, his amount of energy in direct contrast to his size, which makes him quite unmanageable on stage. Mick Øgendahls vibrant talent and impressive skills as a comedian shines through in everything he does. Therefore, he will always be a safe choice. He talks like a waterfall, jumps and jumps around the stage, which guarantees that you are infected with his energy and feeling of being well entertained.

Nikolaj Peyk, Bossy Bo and Jazzy H began their collaboration in 1993. The three had previously made music separately. Nikolaj Peyk as a songwriter and producer for MC Einar, Bossy Bo as a rapper in Flopstarz and Jazzy H as legendary freestyle rapper in the Danish hip-hop underground.

The trio’s first collaboration was rap radio story “Bo did not hate Christmas”, but it was close to DR Childrens Radio. At this time the boys had not yet found a band name. It came almost by accident in 1995 when they recorded their next rap radio story – a 78-minute long musical road movie with the working title The East Coast Hustlers. As it were to be released on CD, put the Children Radio sticker on the cover with the inscription World Longest Rap. People could just as well be told that this was a world record. The CD was an unexpectedly big hit, and even the boldest Jutlanders quickly learned to rap on lines like “Why is it all just so uncool in Jutland?”. The CD went on the charts, but now the newspapers lacked a band name and a album title. The band name was East Coast Hustlers and the title was World Longest Rap and from then Nikolaj Peyk, Bossy Bo and Jazzy H was better known as the band East Coast Hustlers.

In 1996 the East Coast Hustlers earned success with the album Full of lies, which became one of the 90’s largest commercial successes. The album was filled with hits like Hustlerstil, Hopeless and not least He gets too little, which to date is the genre’s most popular evergreen. During the 90’s East Coast Hustlers continued to dominate Danish music and playing gigs at the country’s biggest stages. East Coast Hustlers has won numerous awards. They have received a total of 9 Danish Music Awards. Today life as record-producing musicians are put to sleep, but the scene is East Coast Hustlers still one of the most energetic live acts. Surely they still got their hustler style.